serves principally to display Dr Pyke's writings on California water policy and politics and, in particular, the issues involved in the Sacramento - San Joaquin Delta.  These includes first and foremost the need to further improve and maintain the Delta levee system in order to preserve the Delta as a Place. Then there is a pressing need to restore more natural flows through the Delta, both in pattern and quantity, which is the key to restoring the Delta's ecosystem. And finally, in order to allow more sustainable exports, there is a need to figure out how to extract more water in periods of high flow and use the surplus over current needs to replenish groundwater in the San Joaquin Valley.

was born and raised in Australia and received his bachelor’s degree in Civil Engineering from the University of Sydney. He then worked for the Commonwealth Department of Works in Canberra on various water resource projects before attending graduate school at the University of California, Berkeley. At Berkeley he conducted original research for his Ph.D. under the guidance of the late Professor Harry Seed and formed a close relationship with Professor Seed with whom he subsequently worked on a number of consulting assignments. Since 1977 Dr Pyke has worked principally as an individual consultant on special problems in geotechnical, earthquake and water resource engineering. While at Cal he also studied for a minor in Environmental Planning with Professor Robert Twiss and he has had a life-long interest in solving engineering problems in a way that is consistent with broader community values. 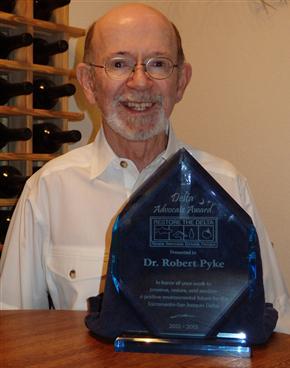